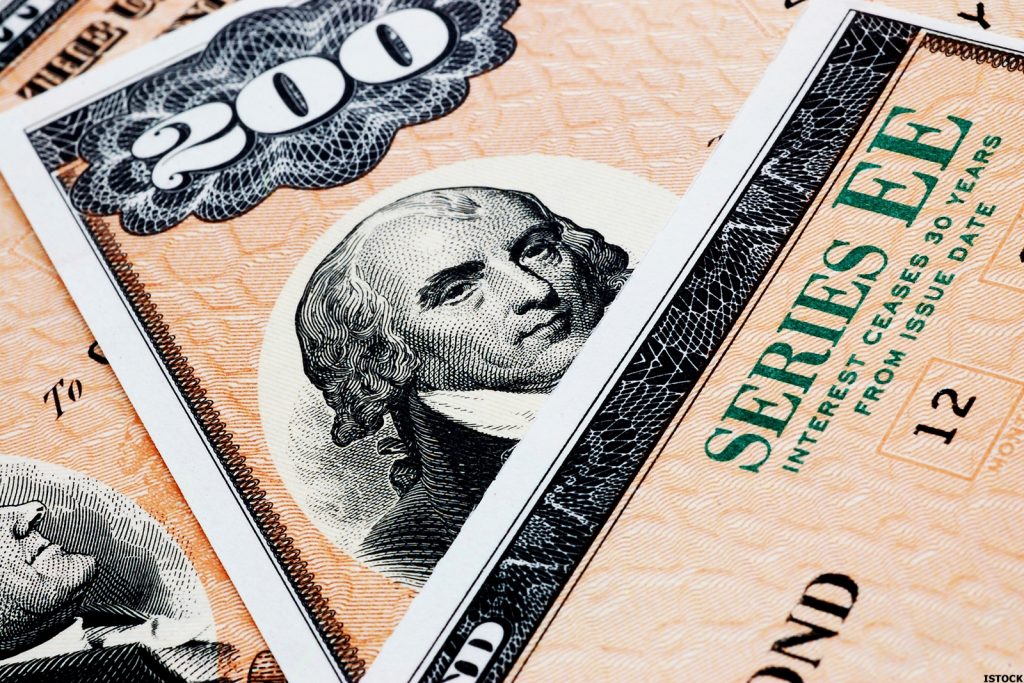 1.1 Types of Treasury Securities:
There are currently four types of these instruments. See the following instruments listed from most liquid to least as well as shortest maturity to the longest maturity:

Treasury Bills (t bills): Treasury bills (T-bills) mature in one year or less. They are zero-coupon bonds, paying no interest prior to maturity; instead they are sold at a discount of the par value to create a positive yield to maturity.

Treasury Notes (t notes): Treasury notes (T-notes) have maturities of 2, 3, 5, 7, or 10 years, have a coupon payments every six months, and are sold in increments of $100. T-note prices are quoted on the secondary market as a percentage of the par value in thirty-seconds of a dollar.

Treasury Bonds (t bonds): Treasury bonds (T-bonds, also called a long bond) have the longest maturity at thirty years. They have a coupon payment every six months like T-notes.

The U.S. Federal government suspended issuing 30-year Treasury bonds for four years from February 18, 2002 to February 9, 2006. As the U.S. government used budget surpluses to pay down Federal debt in the late 1990s.

2. Stripped Treasury Securities:
There is one more type of security that exists from stripping the coupons and principal away from the treasury security as a whole. They are also known as Treasury STRIPS.

STRIPS stands for Separate Trading of Registered Interest and Principal of Securities. They are securities that represent the separate interest and principal components of Treasury securities. The U.S. Treasury created the STRIPS program in February 1985.

Though STRIPS are considered Treasury instruments, they aren’t really Treasury securities. They are synthetic zero-coupon bonds. A zero coupon bonds is a corporte bonds that makes no periodic interest payments, but is sold at a deep discount from face value. The buyer of the bond receives the rate of return by the gradual appreciation of the security, which is redeemed at face value on a specified maturity date.

A municipal bond, commonly known as a Muni Bond, is a bond issued by a local government or territory, or one of their agencies. It is generally used to finance public projects such as roads, schools, airports and seaports, and infrastructure-related repairs. The term municipal bond is commonly used in the United States, which has the largest market of such trade-able securities in the world. As of 2011, the municipal bond market was valued at $3.7 trillion. Potential issuers of municipal bonds include states, cities, counties, redevelopment agencies, special-purpose districts, school districts, public utility districts, publicly owned airports and seaports, and other governmental entities (or group of governments) at or below the state level having more than a amount of one of the three sovereign powers: the power of taxation, the power of eminent domain or the police power.
Municipal bonds may be general obligations of the issuer or secured by specified revenues. In the United States, interest income received by holders of municipal bonds is often excludable from gross income for federal income tax purposes under Section 103 of the Internal Revenue Code, and may be exempt from state income tax as well, depending on the applicable state income tax laws.

3.1 Features of Municipal Securities
Interest Rate – The issuer pays interest to bond investors in exchange for the use of the loaned money. The interest rate is a percentage of the principal (the amount borrowed/invested), accruing over a specified period (typically, semi-annually). Interest rates vary depending on the term and prevailing bond market conditions and may be fixed or variable. Fixed interest rates are set on the pricing date.
Price – The price is the amount investors are willing to pay for a bond initially or in the secondary market. Price is based on certain variables, including current market yields, supply and demand, credit quality, term to maturity, and tax status. Price and yield move in opposite directions. When market yields increase, the price or value of a bond decreases, and vice versa.
Yield – The yield refers to the rate of return an investor earns on the bond based on the price and interest rate. Yield can be calculated in different ways to reflect differing assumptions and investors should consult their brokers or financial advisors to learn more about yield.
Maturity Date – Maturity date refers to the date when the principal on the bond is scheduled to be repaid to the investor.
Redemption Provisions – Some bonds contain provisions that allow the issuer to redeem or “call” all or a portion of the bonds or notes, at specified prices, prior to their stated maturity date.
Ratings/Credit – A credit rating is an evaluation of an issuer’s credit quality based primarily on its current and projected financial and economic conditions. A credit rating is an independent assessment of the creditworthiness of the bonds. It measures the probability of timely repayment of principal and interest of a bond or note. Higher credit ratings indicate the rating agency’s view that there is a greater probability the investment will be repaid. Most bonds are rated by one or more of the three major rating agencies: Standard & Poor’s, Moody’s Investor’s Service, and/or Fitch Ratings. Investors are advised to obtain and review the credit reports associated with a bond offering prior to making an investment decision.
Denominations – fixed interest rate bonds are typically sold in a minimum denomination of $5,000 and whole multiples thereof.
Debt service – refers to the payment of principal and interest on outstanding bonds.

3.2 Types of Municipal Securities
Municipal bonds provide tax exemption from federal taxes and many state and local taxes, depending on the laws of each state. Municipal securities consist of both short-term issues (often called notes, which typically mature in one year or less) and long-term issues (commonly known as bonds, which mature in more than one year). Short-term notes are used by an issuer to raise money for a variety of reasons: in anticipation of future revenues such as taxes, state or federal aid payments, and future bond issuances; to cover irregular cash flows; meet unanticipated deficits; and raise immediate capital for projects until long-term financing can be arranged. Bonds are usually sold to finance capital projects over the longer term.
The two basic types of municipal bonds are:
General obligation bonds: Principal and interest are secured by the full faith and credit of the issuer and usually supported by either the issuer’s unlimited or limited taxing power. In many cases, general obligation bonds are voter-approved.
Revenue bonds: Principal and interest are secured by revenues derived from tolls, charges or rents from the facility built with the proceeds of the bond issue. Public projects financed by revenue bonds include toll roads, bridges, airports, water and sewage treatment facilities, hospitals and subsidized housing. Many of these bonds are issued by special authorities created for that particular purpose.

3.3 Risk of Municipal Securities
Municipal Bonds typically offer an attractive yield advantage over U.S. Treasury for investors in higher tax brackets, but how much are you paying in terms of risk to pick up the added yield? The short answer: not as much as you may think.
Based on a study conducted by the fixed income rating agency Moody’s, yields on municipal securities sufficiently compensate investors for the additional risks. In the 42-year period ended with 2011, 100% of AAA-rated municipal bonds delivered all of the expected interest and principal payments to investors, while 99.9% of Aa-rated bonds did so. (Aaa is the highest possible rating; Aa is the second highest). Overall, only 0.8% of muni bonds rated investment grade defaulted within ten years of issuance.
Higher-quality bonds tend to perform better than lower-rated securities even during times of economic distress since the underlying issuers have sufficient financial strength to keep making their payments even under adverse conditions. However, even lower-rated municipal issuers have a relatively low incidence of default. From 1970-2011, 7.94% of below-investment-grade muni bonds defaulted.
While the default rates for the lowest-rated bonds (B and below) were above 20%, these lower-rated bonds only make up a small portion of the overall muni market.
Keep in mind, the price of a defaulted bond does not necessarily go to zero – investors can typically expect some degree of recovery. In a 2009 study, the investment firm Asset Dedication offers the following summary of the likelihood of defaults in the municipal market: “…there are a number of safeguards in the municipal bond market that reduce the likelihood of high default rates… Improved regulation, transparency, and oversight have brought more structure to the market. Bond insurance provides investors with an added layer of protection.

3.4 Yield of Municipal Securities
In recent years is whether segmentation exists in the municipal bond market. The presence of market segmentation suggests that securities can be subdivided into distinct groups according to some characteristic and there exists a lack of substitution between these groups on the part of borrowers and/or investors. Hendershott and Kidwell, for example, found evidence that market segmentation affected yields between regionally and nationally marketed municipal bond issues. Others contend that the municipal bond market is relatively efficient and no permanent segmentation effects can exist. Most recently, Campbell examined possible segmentation resulting from the large acquisitions of municipal securities by commercial banks and found that bank demand for municipal securities had no significant influence on the yield spreads between municipal bonds which differed in default risk, term to maturity, and tax treatment. This is consistent with the argument that the combination of progressive personal income tax rates and fixed corporate income tax rates induces corporations to issue an amount of debt such that the marginal investor in taxable and tax-exempt securities pays taxes at the full corporate rate . If segmentation does not exist, two peculiar features of the term structure of municipal yields cannot be fully explained. For one, municipal yields have almost always increased monotonically with maturity. This is true both for market averages of similarly rated municipal securities and for re-offering yields on individual serial.

[Writer’s Note: Sorry for being absent for a while. But will try to be regular from now on. Today’s topic was actually a class assignment so I skipped a few things here & there. But I learned a lot while researching on the topic!!! So I thought I should share it!!!